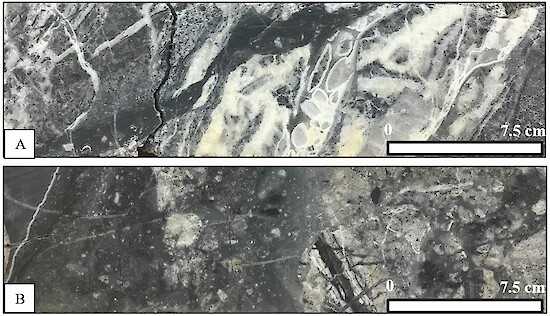 The Eldorado Gold Property is located 22 kilometres north of the Bralorne mine, and 17 kilometres north of the community of Gold Bridge (Figure 6). The 9028-hectare property covers multiple Minfile showings and two past-producing (1930s & 40s), small-scale gold mines that form the northern extent of the Bridge River-Bralorne/Pioneer orogenic gold system. Gold occurs in polymetallic sulphide veins and vein-stockworks within broad epizonal quartz-carbonate alteration in the Eldorado granodiorite stock and surrounding rocks, which are complexly juxtaposed by numerous faults associated with regional-scale structures linked to gold mineralization. For detailed maps and project photos, please download the presentations at https://www.gelumcapital.com/.

In September 2022, Gelum engaged Quesnel Bros. Diamond Drilling (“Quesnel”) to drill approximately 3000 metres from eleven (11) drill pads targeting gold-arsenic-antimony geochemical anomalies and their possible source structures (see Figure 2). With one exception, the areas to be tested have very shallow drilling or no previous record of drilling. Quesnel used a lightweight Hydracore 2000 drill rig and helicopter service was provided by Blackcomb Helicopters, with a base in nearby Gun Lake. Drilling went well, with some shifts achieving over 70 metres of core and an average overall recovery of 87%. A total of 795.5 metres were drilled in three holes from three widely spaced platforms (Figure 2). 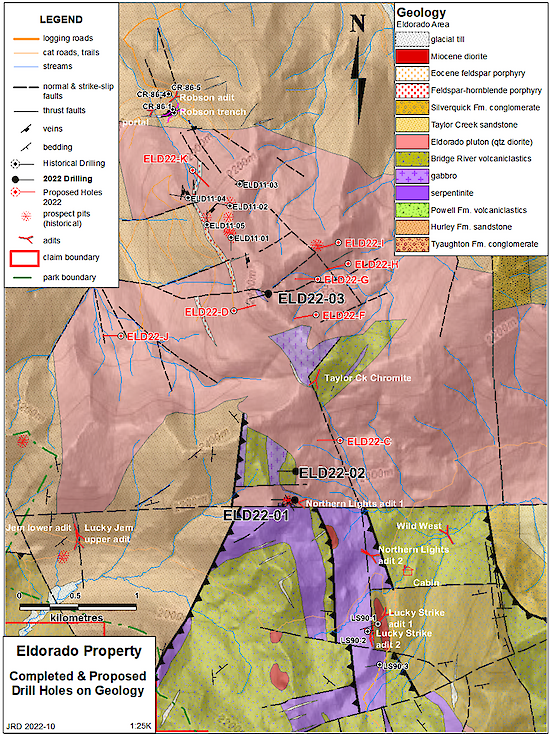 The first drill hole, ELD22-01, was collared at the entrance to the collapsed Northern Lights No. 1 historical adit, where in 19341 a 4,643-pound sample of sulphide-vein mineralization from an adjacent historical test pit returned 1.74 ounces/ton Au (2108 kg at 54 g/t Au). In the outcrops above the drill collar, several directions of gold-bearing sulphide veins are present in addition to thick panels of gossanous quartz-carbonate-sulphide cutting the Eldorado diorite and older Bralorne greenstone units for over 1000 metres along strike. ELD22-01 intersected Eldorado diorite cut by eight quartz-carbonate-sulphide structures ranging from 0.3 to 5.7m thick, all estimated as close (70-100%) to true width based on vein to core angles (Figure 3). The hole ended in weakly pyritic diorite at 268.5m.

The second hole, ELD22-02, was collared 250 metres to the north of ELD22-01 (see Figure 2) and intersected very different units and mineralization. Below 10m of overburden, the hole intersected gossanous, partly silicified diorite/gabbro from 10 to 92.7m. Minor arsenopyrite is present to 34m and the interval includes 5m of gossanous massive silica with up to 1% pyrite-arsenopyrite, and a lower 10.2m intercept of quartz-carbonate breccia/stockwork with trace pyrite and chalcopyrite (Figure 4). From 92.7m to 168.6m the hole passed through feldspar porphyry with several narrow (2-10cm) silicic structures, and then entered a silicic breccia with minor disseminated pyrite, arsenopyrite, pyrrhotite and chalcopyrite to within two metres of the end of hole at 187.0m in andesite porphyry.

The third hole, ELD22-03, targeted the largest gold-arsenic-antimony talus geochemical anomaly 1500 metres to the north of ELD22-02, just north of Eldorado peak (Figure 2). The hole remained in Eldorado diorite for the entire length of 340.0m. Several quartz-carbonate-sulphide veins and poly-phase vein breccias were intersected, the most significant being a nearly continuous silicified interval, 65.2m wide, from 177.7 – 262.3m, the lower contact being a fault that juxtaposes unaltered diorite against the interval. (Figure 5).

The remaining eight holes will be drilled in 2023, as soon as conditions allow. Most will target the east-dipping quartz-carbonate-sulphide panels at greater depths, and over greater thicknesses, than the completed holes to test whether gold grades increase downward. One hole will target the north end of a highly gossanous, gold-mineralized feldspar-porphyry dike on the Robson claim, which was extensively ground-sluiced for gold by the first prospectors in the area.

Readers are cautioned that descriptions of down-hole mineralization and surface sampling results reported here should be viewed primarily as a guidance for future exploration drilling. There is no certainty that mineralized intersections will have significant metal content. Surface sampling is prone to sampling bias and is not necessarily a reliable indicator of mineralization at depth. The qualified person for this release has not done sufficient work to independently verify the historical sampling results described above. 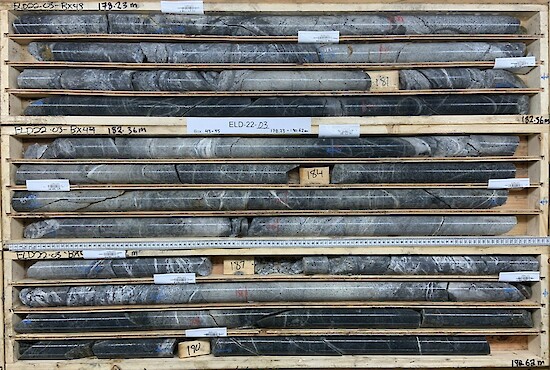 References to other mines and deposits made in this news release provide context for the Eldorado Project, which occurs in a similar geologic setting, but this is not necessarily indicative that the property hosts similar grades and tonnages of mineralization.

Figure 6. Location of other active orogenic gold projects near Eldorado

John Drobe, P.Geo., a qualified person as defined by NI 43-101, has reviewed the scientific and technical information that forms the basis for this news release and has approved the disclosure herein. Mr. Drobe is not independent of the Company as he is a consultant of the Company.

Gelum Resources is a Company led by seasoned management and advisors in the mining and financial sectors. The Company currently has two objectives under management. The first is to define a multi-million-ounce economic gold deposit on the 9028-hectare Eldorado Gold Project, located within the Bralorne-Bridge River gold district, only 190 kilometres north of Vancouver and 74 km northwest of the town of Lillooet, B.C. The Bralorne mines historically exploited the largest, highest-grade, longest-producing lode-gold deposit in B.C. Management is proud to have developed an excellent working relationship with the Bridge River Indian Band (Xwísten) the project is within the traditional territory within the St’at’imc territory (Traditional Territory) in which Xwísten and its members assert, hold and exercise constitutionally protected Aboriginal Title and Rights (“Indigenous Title and Rights”). The Company plans to complete a 3000-meter drill programme this fall.

The second objective is to discover an alkalic porphyry and related skarn deposit within a prolific B.C. porphyry belt in the Interior Plateau region. The recently acquired ML property is accessible by 90% paved roads via Williams Lake, and the remainder by all-season dirt roads and secondary logging roads. The low to moderate relief allows year-round access and work. Airborne geophysics comprising magnetics and radiometrics was completed in early spring of 2022.

For further information about the Company and its exploration portfolio, please refer to Gelum Resources Corporate Presentation:

On Behalf of the Board of Directors

Neither the CSE nor its Regulation Services Provider (as that term is defined in the policies of the CSE- Canadian Securities Exchange) accepts responsibility for the adequacy or accuracy of this release.

This presentation contains forward-looking statements and forward-looking information (collectively, “forward- looking statements”) within the meaning of applicable Canadian and US securities legislation. All statements, other than statements of historical fact, included herein including, without limitation, statements regarding any potential increase in shareholder value through the acquisition of undervalued precious metal deposits for development, joint venture or later disposition, the potential to partner with mine developers to achieve production at any of the Company’s properties (existing or future); the potential for the capital costs associated with any of the Company’s existing or future properties to be low; the potential for the Company to outline resources at any of its existing or future properties, or to be able to increase any such resources in the future; concerning the economic outlook for the mining industry and the Company’s expectations regarding metal prices and production and the appropriate time to acquire precious metal projects, the liquidity and capital resources and planned expenditures by the Company, the anticipated content, commencement, timing and cost of exploration programs, anticipated exploration program results and the anticipated business plans and timing of future activities of the Company, are forward looking statements. Forward-looking statements are based on a number of assumptions which may prove incorrect, including, but not limited to, assumptions about the level and volatility of the price of gold; the timing of the receipt of regulatory and governmental approvals; permits and authorizations necessary to implement and carry on the Company’s planned exploration programs at its properties; future economic and market conditions; the Company’s ability to attract and retain key staff; and the ongoing relations of the Company with its underlying lessors, local communities and applicable regulatory agencies.

Accordingly, the Company cautions that any forward-looking statements are not guarantees of future results or performance, and that actual results may differ, and such differences may be material, from those set out in the forward-looking statements as a result of, among other factors, variations in the nature, quality and quantity of any mineral deposits that may be located, the Company’s inability to obtain any necessary permits, consents or authorizations required for its activities, material adverse changes in economic and market conditions, changes in the regulatory environment and other government actions, fluctuations in commodity prices and exchange rates, the inability of the Company to raise the necessary capital for its ongoing operations, and business and operational risks normal in the mineral exploration, development and mining industries, as well as the risks and uncertainties disclosed in the Company’s most recent management discussion and analysis filed with various provincial securities commissions in Canada, available at www.sedar.com. The Company undertakes no obligation to update publicly or release any revisions to these forward-looking statements to reflect events or circumstances after the date of this presentation or to reflect the occurrence of unanticipated events except as required by law. All subsequent written or oral forward-looking statements attributable to the Company or any person acting on its behalf are qualified by the cautionary statements herein.